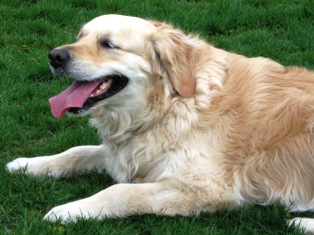 Gracie Allen Golden Pup is never far from my mind. We still miss her like crazy. So, while the three ingredient tomato soup is on the hob and the rain is coming down — again — let’s just take a little stroll down G-Pup lane.

Throwing back to September 2009. The G-Pup was four human years old.

It was the dead raccoon…

AKA, G-Man and Gracie Allen do off-leash…

I was in my office. At the computer. . Tweeting, texting, chatting, direct messaging…

G-Man bangs through the front door and yells up the stairs — You need to come down. We have to talk about Gracie.

Uh-oh. I know this to be code for this is baaaad, and I don’t want to clean it up.

I didn’t want to do it. I did the eye roll, the head thunk. Then, I slid off my chair and bounded down the stairs yelling, WHUT? You have to say that with a U to get it just right.

I knew the what before I hit the landing. The stink rolling up the stairs was a big ol’ fat clue. I wanted to turn and hightail it back to my office, but I’m a dog mama. Any dog mamas — little punk mamas, too — can identify. I tried to breathe through my skin so I wouldn’t gack! and trudged down the last 12 steps, arms folded over my chest, eyes tearing.

Gracie Allen was flopped in the front hall, tongue lolling, tail wagging, happy dog saliva pooling on the tiles. G-Man stood next to her still holding the leash, looking all little-boy-bug-eyed.

G-Man: She rolled in a dead raccoon. Honest to God, I don’t know how it could have happened. I was watching her every second. A little pausing. A little staring at his shoes. I don’t think she ate any of it.

Me: Were you on your cell phone? No moss on Elen.

By now, I am holding my nose and trying to suck air through my mouth and talk at the same time.

G-Man: I’ll take her outside on the drive. It’s sunny. I’ll hose her down.

Me: Forget it. Gracie will be across the border and swilling Shiner Bock in Texas before you can get her damp. I know things.

A few quiet moments ensued while we all regrouped. I did some counting and staring at my bare feet. I did the sigh. The big one. The one that might send you to heaven.

There was nothing for it. I was going to have to take the Golden Pup into the bath and hose her down. We don’t have a laundry tub big enough for a 76 pound dog. We climbed the stairs together. Resigned. Gracie Allen was thinking about the bogeydog who lives in the bathroom — we have one in the basement too — and I was thinking about hair and dead raccoon flying everywhere, especially on me. G-Man retreated to his computer. I’m pretty sure I saw his shoulders shaking. Shaking with laughter because he was on project deadline and didn’t have to deal.

I snapped on a pair of yellow rubber gloves, and thirty-five hectic minutes later the Golden Pup smelled like Satsuma shower gel and I smelled like wet dog and dead raccoon. How’d that happen? Another thirty minutes to scrub and suck the hair out of the tub, twenty for my own detox, and I was back to Sunday night chilling.

Here endeth my sorry tale… until I exact my revenge.

I love a good doggy tale. You?

And that’s how we’re rolling this Throwback Thursday.