Because it’s Halloween, and I’m busy getting all Witchy Woman — thank you, Eagles — I’m doing a reprise of a post written the day after Halloween last year. Enjoy!

Conversation with a vampire… 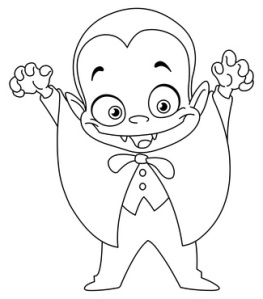 The King of Fright worked his magic last night. Oh, yes. He did. There were ghoulies and beasties who thundered right past my door in their haste to put a Boston marathon between themselves and K of F. I can still hear some of them screaming.

Braver souls, and the totally oblivious, managed to make it past our cheerful, if odd, Jacks and up our wee paver project to knock on the door.

I had door duty this Halloween, and Mr. G, honey had dog duty. Gracie Golden Pup has too much enthusiasm for Halloween night.

She hears the Bam Bam Bam and gallops down the front hall, ears flapping and nails trying to gain purchase on the smooth, ceramic tile.

I live for these moments.

It’s impossible to hand out treats with the G-Pup’s humongous Golden nose stuffed into treat bags sniffing out trick-or-treat booty. The little bumblebees particularly take exception, which can cause bumblebee mamas to frown.

In short, G-Pup is banished to the living room with Mr. G, honey.

An hour into the evening, I answered a bam and found myself face-to-face with a vampire. I’m pretty sure it was The Count, himself.

He said it all in one breath but, then, he probably only needed one being a vampire and all.

I peered down over the tops of my glasses. Dracula had a splinter. Not your mama’s dracula.

I flipped on the light and squatted down. It was clearly time for some vampire triage.

Me: Let’s have a look at that splinter?

Dracula stuck out his index finger, pinching it tight so that the splinter popped up a little bit.

Splinter, for sure. I’m thinking maybe Dracula could just pop those incisors a bit and yank it out. Wouldn’t that be the vampire way?

I look around for anyone out there who might be claiming parentage to a five-year-old bloodsucker. I saw the shadow of a woman at the corner of the hedge straining in my direction, looking a little worried.

Me: Dracula’s got a splinter!

She Who Was Worried sprinted up to the porch and stood behind her vampire spawn.

Me: He has a splinter. Um. Would you like a tweezer?

Mom: No! We’re just around the corner. It will be fine until we get home.

Meanwhile, Dracula continues to be thoroughly engrossed in his finger splinter. I guess you don’t see many of those in the vampire world. And it’s wood. So I guess there is some cause for worry.

Mom grabs Dracula by his good hand and he scrambles down the stairs with his cape flying out behind him.

Me: Wait! Dracula. You forgot… your treats.

I was talking to vampire dust.

So this came today @knowltonandco . I would have done an unboxing, but I’m the gal that always opens the box upside down. 😂 Don’t know where it’s going yet, but it’s perfect. #candles #wallsconce #iron #makesmesmile
We dined at this outdoor patio at Cluny Bistro & Boulangerie, Distillery District, Toronto on a lovely evening in July 2019. Looking in. I took this click right before a foursome snagged that table. I miss Cluny’s.
This is from a series of clicks I took in 2018. Who could stop at one with that colour. It warms me inside and out.