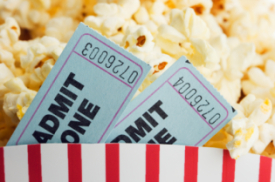 From time to time — this may be the third or fourth time.

From time to time, we elect to have a date night on Halloween instead of greeting tricksters and treaters at the front door. It’s a tough call, because we love those little ghouls and goblins and superheroes. Who doesn’t? And I’m a sucker for putting on a little Halloween finery myself.

What did we do?

Well, I donned my Neighborhood Witch t-shirt that I posted to Instagram a few weeks ago.

Slapped on some lip gloss, scrunched the hair. It was raining. What’s a girl to do?

In 3D. Whoa, baby! When I picked the theater and time, I didn’t realize it was in 3D.

We traveled 40 minutes away to another city because, well… the seats rock. I mean. They actually rock.

I got in line behind a rabbit in a tutu, whose ears were moving up and down, back and forth. She was a really cute rabbit.

Since it was date night, and we were feeling totally Halloweenish and kid-like, I went to the counter and spent enough money to make a sizeable dent in the national debt. I bought exactly one bottled water, one small popcorn, and one bag of M&M’s chocolate covered almonds. It cost a bazillion seventy-eight dollars and 17 cents.

Not for the faint of heart.

It was date night, man!

This movie was a total entertainment-fest.

I hope the rabbit enjoyed it as much as I did. Mr. G, honey, too.