Catching the late night news the other night, I saw a segment on a small hamlet in Alberta called Scandia. And when I say small, I mean population-just-over-a-hundred small.

Scandia holds an annual pie auction to raise funds for their community center. Nothing unusual there. I’ve seen plenty of pies auctioned off at fundraisers. You probably have, too. 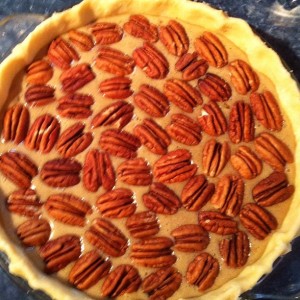 What held me riveted to this news segment was that not a single pie goes for less than 100 bucks.

These lemon meringue pies are baked by Mary, a 63-year-resident of the community and, in the words of the $580 bidder… It’s very good pie.

He’s my kind of pie guy.

He also loves my favorite pie in all the land.

But my second favorite pie — coconut cream. The best slice of coconut cream pie I’ve ever had, hands down, was at the Water Prince Corner Shop in Charlottetown, on Prince Edward Island. And if I were going to pay $580 for a pie, that pie would be it.

The Water Prince Corner Shop is where we had our lobster lunch and our scallops dinner during our September roadmance. It’s where the locals go when they’re not fixing their lobster at home. So we were told. That’s a whole other post.

And this raspberry cream cheese pie at the Prince Edward Island Preserve Company will make you swoon. It’s their speciality.

Mary says there’s nothing special about her lemon meringue pies. Well, she uses extra eggs, and lard in the crust. I’m thinking $580 Bidder feels otherwise. Check out her meringue in the video here. It’s the meringue of meringues.

All you pie lovers out there.

And how much would you pay to be in the Pie High Club?

I made that up.

There is no Pie High Club.

Note: I saw the news segment first at CTV National News with Lisa LaFlamme on the 19th. Love her reportage. The original segment comes from CTV Calgary, Bridget Brown reporting. Check it out.