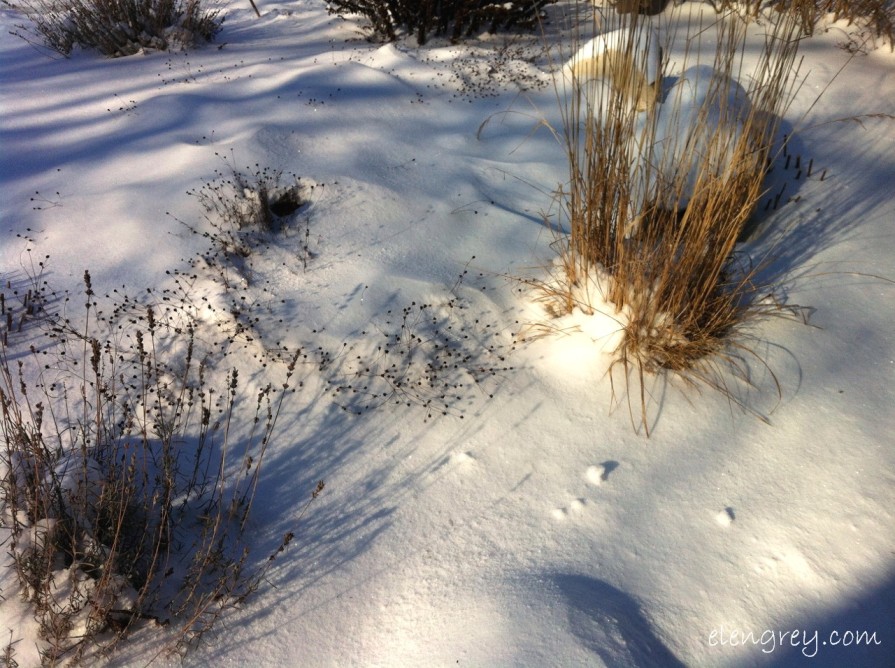 I’ve taken this winter shot more than once.

The way the tiny heads of the moonbeam coreopsis pepper the snow never gets old.

Now, the lavender is adding its shadow.

It looks as cold as it is.

We’re bracing for another winter hit. Blowing snow you can measure in double-digit inches and low visibility.

I must stop scrolling my Instagram faves. They are mostly photographers and travel and food bloggers. That’s how I roll on Insta. Art and travel and food are my valentine. And I’d say a goodly portion of those grammers live in a sunny clime, where the strawberry margarita and nacho reigns, and pedicures and flip-flops are year-round fashion. Living the tulip dream.

Outside of the shower, I haven’t seen my feet since sock weather began in the Great White North. I’m living the Northern Girl life of perpetual toque head, chapped lips and hands, and red nose.

True Confession: I do not have the head shape that supports the beauty that is the winter toque. If someone were to shave my head — Don’t even think about it! — you’d discover something not unlike a topographical map of the moon. Full of dents and craters, baby.

I think food bloggers might naturally gravitate to warmer climates, where they don’t have to face six months of photo-blogging root vegetables and some protein-on-the-haunch that hangs from a pine out back in nature’s icebox. Away from bear and coyote.

Just kidding. We don’t have any bear in Burbville. Okay. We have the occasional poor little bear who’s lost his way. Roar. Roar. Roar. That usually ends with a tranquilizer to the hiney for the bear and a free ride back to the greater Great White North.

Really. I love my Northern Girl life, where water is constantly on the hob — mainly as a humidifier and static electricity controller — and layers are your fashion friend, and shoes taken off at the door are a matter of national policy, and soup is a nutritious restorative against the cold, and not hot-rolling your hair is okay, because you’re just going to stuff it under a toque anyway, and when you take that toque off your hair will be equal parts smashed and static-y. Run-on sentence alert! Aaaaand where mascara is optional, because it’s only going to end up on your cheeks from the winter leak that is your eyes. And nose.

Here be Monday, cresting on a wave of the February whines.