I went outside before coffee, before breakfast, before sunrise — Like that will ever happen! — to sweep the back patio and rake the maple keys out of the yard (again) and to water the lilac and weigela. They were shallow-breathing. I couldn’t take it any longer and folded like a wonky soufflé.

Meanwhile, back at the New Brunswick Road Trip…

We almost always stay in Edmundston, NB when we’re traveling to the east coast.. A lot of roadmancers do. It’s just done. So, I’ve written about Edmundston before.

We arrived early evening, checked-in, discovered our hotel put in a resto-bar since our last visit — Put your hands up in the air! — drove through town, and took a walk by the river.

Edmundston (Pop. 16,000+) has a beauty and a charm. I love that the mayor holds the title President of the Republic of Madawaska.

You sure are purty!

There’s a well-used community park running along the river. We happened upon an outdoor dancercise class. I wanted to jump into the back line, but my flip-flops just wouldn’t cut it. Those women were movin’. I spoke with everyone I met on the path. Met a woman being walked by her dog. A true Edmundstonian. Edmundstoner? She married a Mainer, just across the river in a town (with a post office and a McDonald’s) about a tenth the size of Edmundston, so she crosses the border regularly for the Edmundston scene. I think this regular border-crossing was part of the prenup.

What kind of writer would I be if I didn’t get her story? 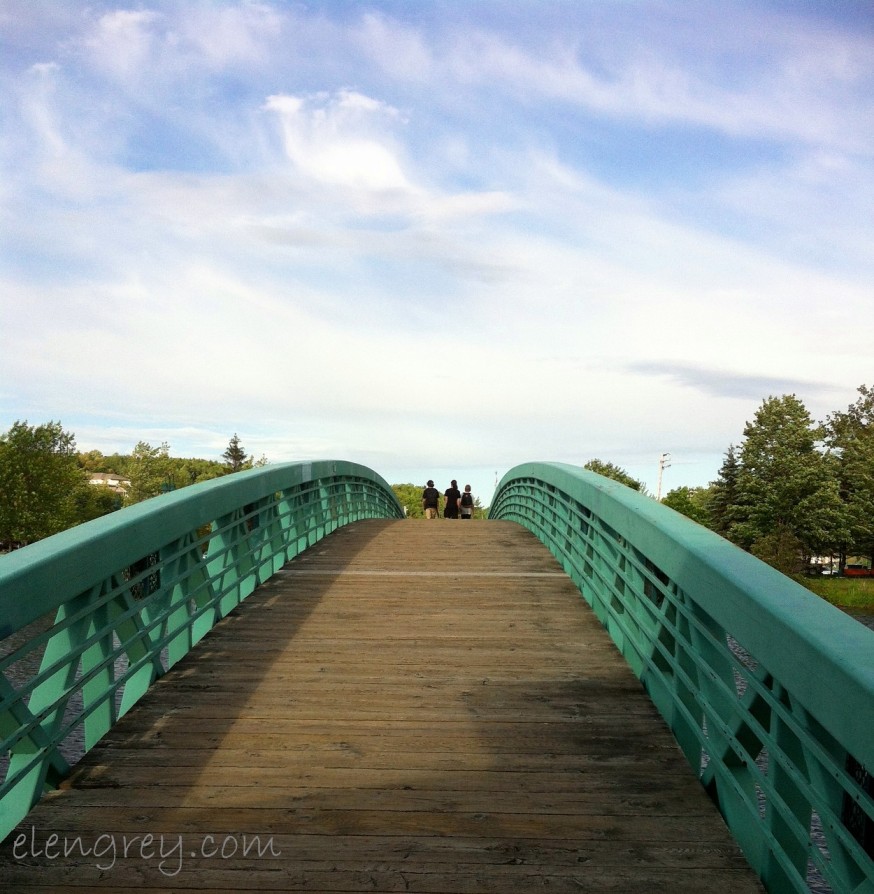 I talked with everyone I met and looked at G-Man and said — See. I know how to do the village thang. Yup.

I have a fondness for Edmundston. Just do!

We head out the next morning bright and not too early. That’s how we roll. 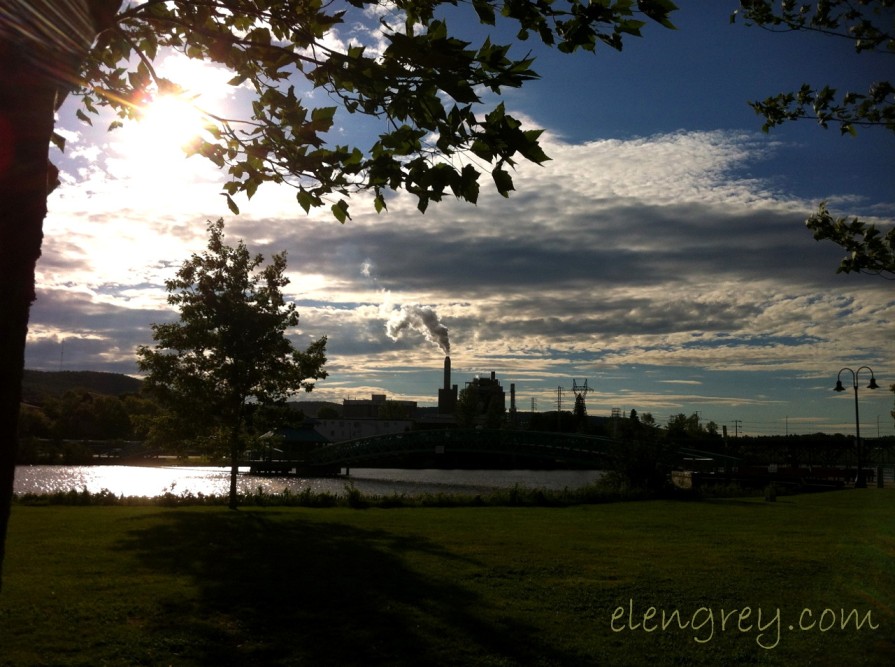 Time to turn the Atlantic Provinces Map (New Brunswick, Newfoundland and Labrador, Nova Scotia, Prince Edward Island) over to the New Brunswick side.

We run down the Trans-Canada Highway, hugging the New Brunswick-Maine border until Woodstock (not that Woodstock), then we start heading east and just under Fredericton — Sorry, Fredericton! You’re not on our itinerary this trip. We still love you. — and head south on Highway 7 to Saint John.

Trees and rock. Rock and trees.

If there is a rest stop in New Brunswick, we didn’t find it. Irving Oil is king, and that’s where you go. We discovered that little tidbit at Oromocto, New Brunswick (Pop. 8,900). We exited the highway when we spotted the Irving sign. We needed gas and a pee break.

There isn’t any question that you’re at the Blue Canoe, because there is a freakishly blue canoe on the lawn outside the building. Total love.

She Who Must Be A Drama Queen sobs with gusto. Did not get a click of the Blue Canoe. How did that happen?

There are some images here. It’s the wild blue yonder, I tell you.

The place was bustling and hustling. It is an obviously popular spot with locals and travelers. It was jam-packed. And I’m up for eating anywhere the locals eat. The main dining room is big and casual. Red checkered tablecloths on square tables, wait staff in blue, an in-support-of-a-charity dining section that could be reserved. The service was fast and friendly. The food fresh. TripAdvisor gives it a Certificate of Excellence and lists it as #2 of 32 restaurants in Oromocto.

Since we were in New Brunswick, we decided to order the special of the day — deep-fried shrimp and scallops with coleslaw and fries. Holy Shrimp and Scallop, Batman! No wonder everyone was smiling. Our server asked if we would like the fresh bun that comes with it. I looked at the table to my left. Those buns were the size of bread and butter plates. I blinked and said, I don’t think I can handle that.

I ate one breaded shrimp and proceeded to de-bread the rest of my shrimp and scallops. Those shrimp were huge, and I would never have finished them otherwise. No shrimp left behind! I’m a bit of a shrimp and scallop ‘ho, so I hope I never develop an allergy.

We couldn’t justify sitting on dessert the rest of the way to Saint John so… skipped that.

Let’s just roadmance all the small adventures with shrimp and scallops on top.

P.S. My biggest fear writing this post was getting the “d” in Edmundston every single time. Crosses fingers.

14 thoughts on “Running Down The Road, The Sequel… + Getting the D in Edmundston”