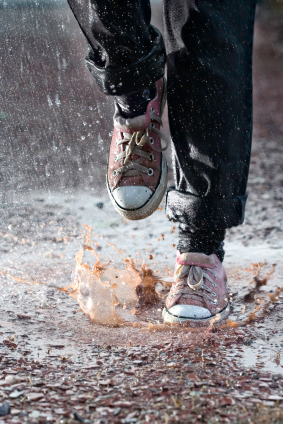 Here be the first Fridaaaaay! of April.

I’ve seen some tomfoolery on the intertoobs today. You have too, right? My guess is that some of you were even instigators of said tomfoolery. I won’t name names, but feel free to fess up.

“The world is mud-luscious and puddle-wonderful.” — E.E. Cummings

That is one of my top five favorite spring quotes.

So. April brings the showers that produce the May flowers. Unless, of course, Mama Weather has her knickers in a twist like she does when she has to step a toe in Canadaland, and then it’s snow showers and toques all over again.

‘Cause I be paintin’ this month.

Except for the two hours I spent at the optometrist’s today trying on eyewear. Specifically frames. There are some contenders. This process will take almost as long as choosing paint colors for the interior of the Elen casa. That’s why I’m starting early. And there will be a lot of wailing and gnashing of teeth. Not necessarily by the same person.

Clearly, I do not know how to spell gnashing.

Look it up, Buttercup!

I have to say that a lot.

In honor of April — the month of showers — six more things you probably didn’t know about me.

~ Once a year, I buy thick-cut bologna/baloney and eat it with saltine crackers. Just like my mama taught me. That could be just a bunch of baloney, but I’m not sayin’.

~ I’ve eaten sweetbreads, but only once. I ordered them in a French restaurant in Chicago. They were not what I thought they were. It took more than a spoonful of liquor to make the sweetbreads go down.

~ I love country music almost as much as Motown, especially if it involves the word tractor.

~ I’m partial to a good slide on the playground. Move over kids.

~ I prefer flats to heels, and barefoot trumps all.

Now. Tell me one more thing about you.

No April foolin’ around.

Note: The first image is a licensed, royalty-free image from iStockphoto.com. No poaching, please.