The season after winter.

Sometimes referred to as spring.

Not at Casa Elen.

The season when all the little spiders, tucked into their cami-nests, start taking a stroll on the wild side across the walls and ceilings. And it’s not like I don’t dust and vacuum and do regular perimeter patrol of the walls and ceilings, and well, just the whole interior of the house. Maybe even the exterior.

They are in the wrong habitat.

Mr. G honey has gotten used to my freakish habit of total area recon before my head hits the pillow. It’s the only season I sleep on my back, because I have to spend 15 minutes monitoring the ceiling before lights out. This usually involves a flyswatter, a flip-flop, and (upon occasion) a hammer.

Did I mention that I don’t like indoor spiders?

I don’t like them outdoors either, but I try to do the right thing and shoo them away.

That’s really code for Holy Mother of God. Shriek-like-a-girl. Run into the house. Slam the door. Throw the bolt home. And pull the shades.

I need a safe room from spiders.

The first time Mr. G honey was startled awake with his new wife marching around the bed, eyes on the ceiling, stalking a multi-eyed, multi-legged interloper the size of birdseed, I’m sure he was thinking there was an important question missing from the pre-nup questionnaire. A question you might want to add to a speed-dating round. Just a suggestion.

Now, he’s used to it. Doesn’t flinch. Doesn’t wake. Let’s be honest. Doesn’t really care. When you marry an I’m-afraid-of-indoor-spidies-freak, you learn to go with the flow. And when he thinks freak, he’s thinking it in the most loving way. 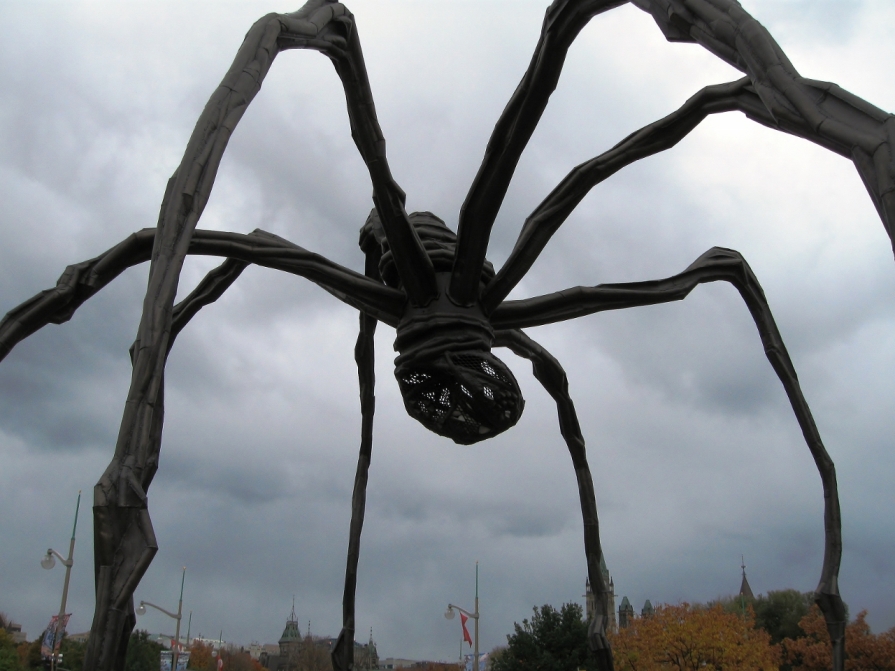 Run for the hills!

These images were taken in Ottawa (our nation’s capital, fourth largest city in the land) in autumn of 2011, aka the other spider season. Don’t go to Ottawa during spider season. Hear me on this!

The container farm is growing like it’s hopped up on sheep manure crack, which it probably is. Just mix with rain and grow.

The G-Pup is eating the tender, new grasslings just as fast as they sprout from the ground.

We saw Maleficent on a date night last week, and Angelina Jolie was magnificent in her maleficence. Next up — X-Men: Days of Future Past. Thanks for taking the poll, peeps.

And that’s how we’re rolling on Thursday.